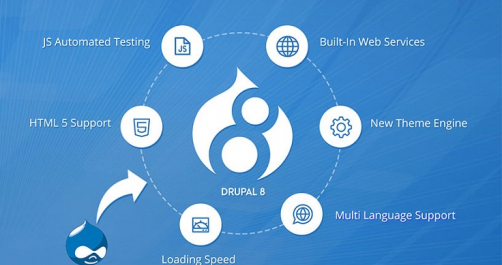 If your site is built with Drupal 7 or less, you may be wondering what all the fuss is about Drupal 8. How is it better? Is it worth the investment to migrate? In this post we’ll highlight 7 of the many reasons to take the plunge.

Unlike Drupal 7, with its image styling tightly linked to screen size, Drupal 8 come fully responsive, no customization needed. Elements like menus, blocks and even images automatically reshape to work and look good on any device, be it mobile application, laptop, voice recognition device or IoT (eg: smart fridge). With Drupal 8’s mobile friendly toolbar, even admins are free to manage content from their mobile device!

Drupal 8 boasts a technology called BigPipe which, due to the way it loads and caches content, improves the front-end speed and performance significantly, as previously viewed content comes from cache and not the server as in Drupal 7. This makes for a great user experience.

Compared to Drupal 7’s PHP template-based theme system, Twig’s syntax is simpler and more secure. Twig allows themers with HTML/CSS skills to modify markup without having to be a PHP expert or carry the risk of causing security issues on a site.

Drupal 8 now has the text editor "CKEditor" in its core, giving developers and users the ability to enrich their content/text with MS Word like features. The new module “quick edit” allows users/site admins to perform IN-LINE editing and instantly see the content at the websites frontend, without having to go to the backend to update or edit.

Migrating to Drupal 8 will be an investment that lasts. Drupal 6 is no longer supported and Drupal 7 will reach its “end life”. Yes, upgrading from Drupal 7 to Drupal 8 still requires a total rebuild BUT after that you won’t need a total rebuild to go on. Drupal 8 also offers monthly bug fixes, security releases and semi-annual minor releases of the core – meaning you won’t have to wait years for a new version, but a few months. Modules are also compatible between immediate versions, so never again will you have to say, “We can’t upgrade you to Drupal 9 because module X is only in Drupal 8.”

Blue Sky Solutions is a software development company, with offices in Durban and Cape Town, South Africa. We specialise in the analysis, design and development of custom web and mobile applications, ecommerce solutions and website design.